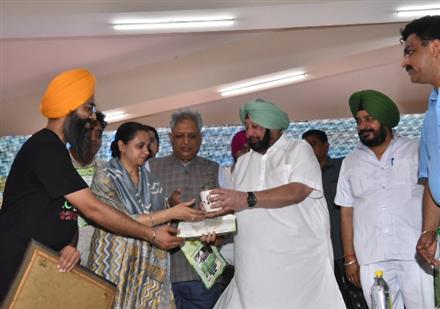 Ropar,May 5,2019 : Taking a tough stance on environment protection, Punjab Chief Minister Captain Amarinder Singh on Wednesday called for collective efforts by every citizen, while stressing the need to be stricter with industry on adherence to environmental standards in order to check pollution.

Speaking at a state-level function to mark the World Environment Day which coincided with the first anniversary of the government’s flagship health project, Mission Tandarust Punjab, the Chief Minister underlined the importance of an apolitical approach to addressing environmental concerns to provide sustainable atmosphere to our future generations.

The government can make policies and implement them, but the realization about the need for personal efforts by one and all, and stricter observance of environmental norms by industry, is equally important to achieve sustainability goals, said the Chief Minister, noting that this year’s World Environment Day coincided with the 550th birth anniversary of Sri Guru Nanak Dev ji, who always advocated environment protection.

Announcing the launch of a project, by the year end, for cleaning of Buddah Nullah, the Chief Minister said saving the environment was the responsibility of each one. He also underlined the responsibility of the citizens in conservation of ground water, whose levels in Punjab were depleting fast. Pointing to reports suggesting that Punjab will become a desert in 20 years, he lamented that free power and free water had led to wastage, making it necessary for farmers to realise their responsibility on this count.

He recalled his own experience while flying to Amritsar, when he saw a clean Beas contrasted with a dirty Satluj, whose water was brackish due to pollution from nearby cities, towns and industries. The State Pollution Control Board was doing its best to reverse the situation but the people of Punjab needed to pitch in with their efforts, said Captain Amarinder.

On the government’s part, he had once again ordered a stop plantation of the water-consuming Eucalyptus trees along the road side, which he had also banned in his earlier tenture, said the Chief Minister, urging people to plant traditional trees like Jamun, Mango etc to save the environment of the state. He underscored the need to get out of the Paddy plantation cycle and move towards alternatives, and added that the proposed Machhiwara food processing plant was one step forward in this regard.

With water situation worsening, glaciers melting, forest cover decreasing and air polluting increasing, desperate measures were needed to control the situation, said the Chief Minister, asserting that every individual needed to become conscious of what he/she could do around his home and neighbourhood to save the environment.

On the occasion, a presentation was made by IIT Ropar, on whose campus the state-level event was held. The IIT Director, Dr. SK Das, welcomed the Chief Minister earlier on his arrival.