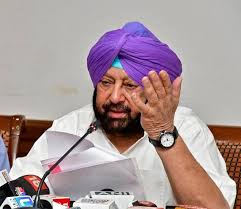 Chandigarh,August 22,20019: Even as the state government scaled up its flood rescue and relief operations, Punjab Chief Minister Captain Amarinder Singh on Wednesday wrote to the Prime Minister seeking a Rs 1000 crore special package to address the losses resulting from the flooding.

The Chief Minister has also urged Prime Minister Narendra Modi to instruct the concerned authorities to waive off crop loans of banks/ financial institutions availed by the affected farmers in the affected villages during the current cropping season.

The flooding in river Sutlej due to the discharge of water from Bhakra Dam, the heaviest since 1958, had caused extensive damage to the standing crops and inundation of residential areas in the villages, the Chief Minister, adding that an early estimated suggested the damage to be to the extent of Rs 1700 crore.

Realising the gravity of the situation, the State Government had declared it a Natural Calamity in the affected areas, said the Chief Minister, adding that though necessary assistance was given by the Army authorities, the floods in river Sutlej had severely damaged standing crops, houses and other rural and urban infrastructure at many places, especially in the districts of Ropar, Ludhiana, Jalandhar and Kapurthala covering over 100 villages.

The Chief Minister said he had instructed the concerned officers of the State Government to prepare the required memorandum for Special Package for consideration of Government of India in due course.

The request from the Chief Minister came amid reports that 326 villages across the state had been adversely impacted, with loss of standing crops on nearly 1.20 lakh acres of area submerged under water.

Services of the Army, the NDRF and the SDRF had been pressed, especially in the worst affected areas of Jalandhar and Ferozepur district, on the directives of Captain Amarinder, who was personally monitoring the situation. He has also instructed the state Chief Secretary to stay in constant touch with Special Chief Secretary and Principal Secretary Water Resources, said an official spokesperson.

According to the spokesperson, with rescue and relief operations on war footing, 5023 people had so far been rescued from the affected villages.

More than 36,000 paranthas and 18,000 packets of dry ration along with water bottles had been air dropped for the residents of all the 18 affected villages of Jalandhar with the help of the Indian Army.  The relief packets were transported to Jalandhar Cantonment earlier in the day and were then loaded on to six Army Helicopters under the supervision of Deputy Commissioner and Senior Superintendent of Police.

In Ferozepur alone, 368 persons were rescued by the jawans of National Disaster Response Force (NDRF) and Indian Army during a special rescue operation.

In Ludhiana, the administration successfully averted a possible breach in Mattewada complex around village Ghadi Fazil, while more than 60 persons had been evacuated from the five affected villages of the district.

In Kapurthala district, more than 200 persons had been rescued in 62 villages in the Sultanpur Lodhi area.  In Ropar, 86 multi-purpose health workers, 111 ANM nurses along with 40 fully equipped medical vans had been pressed into service to conduct special health camps for flood affected persons and provide them necessary medical care. As many as 10 relief centres had also been set up to rehabilitate the displaced families.