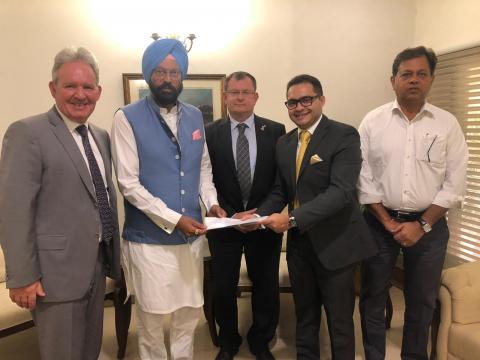 Chandigarh,September 2,2019: “The University of Birmingham (UK) would join hands with the Punjab Government in harnessing the enormous sporting talent that the State of Punjab possesses with the development of the sporting infrastructure in the Maharaja Bhupindra Singh Sports University, Patiala besides also rendering assistance in strengthening and streamlining the academic program of the University.”

Divulging more, the minister said that the partnership between the Punjab Government and the Uiniversity of Birmingham would cover a whole gamut of areas including Psychology, Physiology, Nutrition, Coaching etc. He also said that the other aspects such as talent identification, talent development and talent support, Management of the health of the players, Development of academic programmes, and Training in sports science.

The delegation members also praised the sporting potential of the players of Punjab and assured the minister of active assistance in bringing sports standards to perfection in the State.

Universities must intimately connect with the social life of the people; should not remain the proverbial ‘ivory towers’: Vice President;