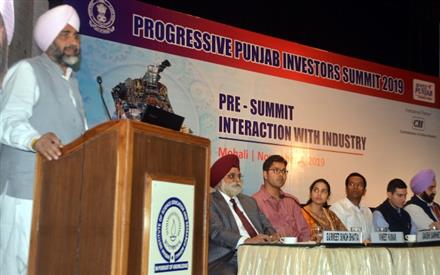 Chandigarh, November 4, 2019: Flaying the Modi regime for playing havoc with the revenue sharing pattern, the Punjab Finance Minister Manpreet Singh Badal today demanded immediate release of state GST so that Punjab not continue to suffer because of delayed release of the payment.  Badal blamed centre for colossal mismanagement of economy plunging major financial sectors into distress.
Addressing the investors during the Pre- Summit interaction event with the Industry organised by Invest Punjab ahead of Progressive Punjab Investors Summit-2019 which would be held in December, the Finance Minister asserted that with Captain Amarinder Singh’s government successfully eradicating Inspector Raj which has given a boon to the revival of Industry which was evident from Rs. 50,000 crores of investment already taking of ground in Punjab in last two and half years.
Reiterating Captain Amarinder Singh’s personal commitment to revive industry, FM  Manpreet Singh Badal pointed out that Punjab has the potential to become number one state in the country. Various pro industry initiatives and policy interventions have worked tremendously well improving the overall industry sentiment in state, he added.
Badal also urged the industrial bosses to attract further investment for Punjab to take the state to even greater heights. He further said that we have world class engineers and technicians besides a thriving eco system for budding entrepreneurs and together we will reclaim the lost economic glory of Punjab.
Extending a personal invitation to entrepreneurs to participate in Progressive Punjab Investors Summit-2019 to be organized at Mohali from December 5th to 6th, Punjab Finance Minister said that this summit would be a milestone in exploring the tremendous business potential in the state.
Speaking on the occasion, MP Anandpur Sahib Manish Tewari lambasted Modi led union governments financial policies due to which country’s growth rate has come down to all time low to just 5 percent. Castigating Modi for wrecking havoc with economy, Tewari said that overall confidence of people in financial institutions was at its lowest ever. Economy which should be growing around 10 percent has plummeted to less than 5 percent.
Tewari said that despite unfavourable environment for Industry due to mismanagement of Modi led union government, the Punjab Government under the dynamic leadership has taken robust steps to build the faith of the Investors. ” Punjab with its unique advantageous position besides best in the country trade union environment would act as a perfect Eco system for propelling overall growth and prosperity in the region”, Tewari added.
On this occasion  Vini Mahajan ACS Industries Department Punjab, headed the interactive session with the Industrialists of the region and redressed their issues. She also promised that the Punjab Government has made best Industrial policy with lucrative incentives. She assured that bureaucracy will implement this policy in true sense providing congenial environment for the investors.
The Industrialists shared their views on the occasion and said that corruption free environment, cheaper electricity, availability of skilled labour, single window clearance, no problem of labour unions, road infrastructure and eco-system has made Punjab best destination for ease of doing business.
Earlier, Rajat Aggarwal, CEO, Punjab Bureau of Investment Promotion and  Vineet Kumar Additional CEO Invest Punjab gave a detailed presentation on various initiatives of the State government. He encouraged them to set up anchor units and assured that the government would provide full support in terms of infrastructure and speedy clearances.
Prominent among present on the occasion Deputy Commissioner SAS Nagar Girish Dayalan, Major B.S. Kohli Advisor Investors Facilitation, ADC (G) SAS Nagar  Sakshi Sawhney and prominent industrialists of the region.