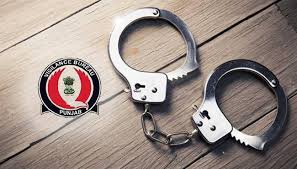 Disclosing this here an official spokesperson of the Vigilance Bureau said ASI Sarbjeet Singh and his middle man ‘Luddan’ were nabbed red-handed on the complaint of Suman Chauhan of New Gandhi Nagar, Jalandhar. The complainant has approached the VB and alleged that the accused ASI and his middle man were threatening her and demanding Rs 1 lakh for not implicating her in a drug case.

After verifying his information, the vigilance team laid a trap and the accused ASI and middle man were arrested on the spot while taking a bribe of Rs. 10,000 of from the complainant in the presence of two official witnesses.

He informed that a case under the Prevention of Corruption Act has been registered against both the accused at VB police station Jalandhar and further investigation was under progress.

No incident of Loot as of now reported on Brand Rath Road ADCP I ,Jalandhar Vatsala

Security threat to jail with recovery of mobiles from prisoner

Ludhiana police claimed to have busted a gang of ATM fraudsters, with the arrest of five of its members