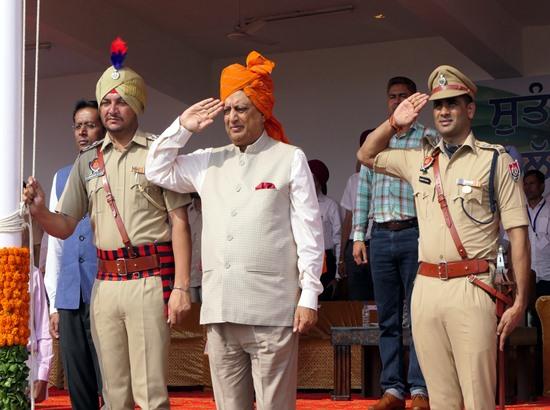 These views were expressed here today at the Government College, Phase-6, Mohali by the Speaker, Punjab Vidhan Sabha Rana K.P. Singh after unfurling Tricolour on the eve of 73rd Independence Day.

He also said that he would approach the Union Government for getting the punjabi freedom fighters their due. He also divulged that after freedom the punjabi community contributed maximum in feeding the nation and showed the pathway to prosperity to the entire country. The punjabis contributed in every sphere be it the defence forces, cinema, olympians in sports and eminent political luminaries.

The Speaker, Punjab Vidhan Sabha further said that the Punjabi community also played a yeoman’s role in ushering of the Green Revolution and their role in the wars against China and Pakistan can never be forgotten.

He also added that today, Punjab is marred by drugs and the agricultural sector is also facing problems. But the Punjab Government led by the Chief Minister, Captain Amarinder Singh has waged an all out war against drugs and has striven to make Punjab chart its course towards prosperity.

The Punjab Government has waived the farm loans of the farmers in a phase wise manner, nailed the gangsters and maintained the law and order situation well.

Earlier, the Speaker, Rana K.P. Singh took salute from the march past by the contingents of the Punjab Police, Guardians of Governance (GoG), Mai Bhago Armed Forces Preparatory Institute, Government College Mohali and NCC as well as scouts of various schools.

He along with the Deputy Commissioner Mr. Girish Dayalan and SSP Mr. Kuldeep Singh Chahal also inspected the parade.

The eminent people from other spheres, Platoon Commanders of teams participating in the programme, teams presenting cultural programmes, and the players.

The Speaker and the Deputy Commissioner also released balloons as the symbols of peace on the occasion. Rana KP Singh also announced holiday on 16 August in all the educational institutions of the district SAS Nagar.