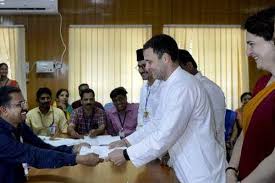 By SK.Vyas :
WAYANAD(Kerala): April 4, 2019:  Rahul Gandhi Congress Party President filed his nomination papers from  Wayanad in Kerala on Thursday, accompanied by his sister Priyanka Gandhi.
Rahul Gandhi has also decided to contest from his traditional constituency Amethi in Uttar Pradesh.
Polling would be on April 23 at Kerala. There are 20 Parliamentary constituencies in Kerala State

DIVISIONAL COMMISSIONER AND DC FLAG OFF AWARENESS VAN TO MAKE PEOPLE AWARE ABOUT THE IMPORTANCE OF RIGHT TO VOTE
Congress, SAD look for winnable candidate from Ferozepu
Comment