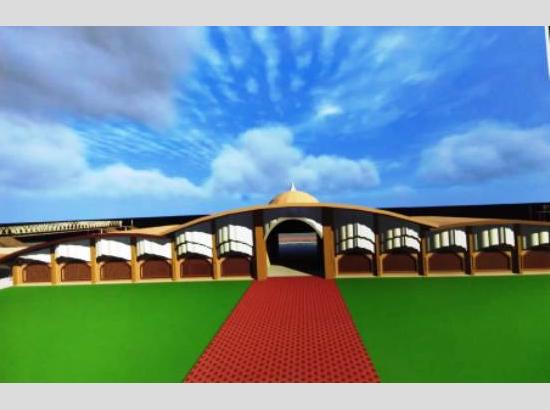 Ferozepur, June 8, 2019:  Ahead of 550th Birth Anniversary of Guru Nanak Dev, the railway authorities have decided to give a new look to Sultanpur Lodhi railway station by upgrading with a design of 13 arcs front elevation symbolic to ‘Tera Tera’, to accommodate 30 lakh pilgrims expected to the city to participate in the historic event. Guru Nanak lived in Sultanpur Lodhi for 14 years.  It is here that he got married to Bibi Sulakhni and later attained enlightenment at the end of 15th century.  The town is dotted with gurdwaras commemorating events from his life.

Giving this information to the media persons, Rajesh Aggarwal, Divisional Rail Manager, Ferozepur Division  said, Keeping in view the  550th Birth Anniversary celebrations at Sultanpur Lodhi and the pilgrims in lacs are expected to arrive  in the town. Railway being a convenient means of transportation, all the required facilities with modern amenities,  at the railway station are being expanded.

Since the approach to the  Sultanpur Lodhi is through two railway crossings, the railway have decided to convert the both as railway underpass for uninterrupted flow of traffic during the celebration days, said DRM.

Second project is to construct high-level platform number 2 and foot-over-bridge to connect both the platforms for the convenience of the passengers besides making all other arrangements of water, waiting hall etc., said Rajesh Aggarwal. DRM also showed the sketch design of the railway which will give a face-lift to the entire old railway station. As per the information, ahead of the 550th birth anniversary of the first Sikh Guru and founder of the Sikh religion Guru Nanak Dev, the Centre and State government has decided to undertake a series of commemorative activities across India and aboard. The Punjab government plans to take 900 acres on rent from farmers to set up three tent cities of 100 acres each besides various other arrangements for the convenience of the pilgrims.  A commemorative coin and postage stamps will also be released by the Department of Posts.  Doordarshan will arrange live telecast of programmes on Guru Nanak and the Gurbani.