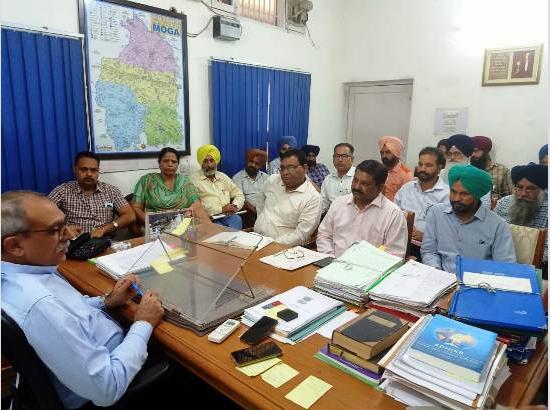 Our Crrespondent:
MOGA, October 15, 2019: In a bid to crackdown on the stubble burning menace, the Deputy Commissioner Moga Sandeep Hans on Tuesday said that the district administration will mark “Red Entry” in the Girdawari of Agriculture land where paddy residue burning takes place.

The directions came when Deputy Commissioner was presiding over the meeting with Sub-Divisional Magistrates including Narinder Singh Dhaliwal (Dharamkot), Swaranjit Kaur (Baghapurana) and Ram Singh (Nihal Singh Wala), Plant Protection Officer Dr Jaswinder Singh Brar and other officials regarding the prohibition on stubble burning in the district.

Deputy Commissioner said that once the red entry will be marked in land records, the concerned farmer won’t be able to get any benefit of subsidies being given by the government.

It is pertinent to mention that the Agriculture officials on Monday, impounded a combine, which was being used to harvest paddy without using super straw management system (SMS) at Bughipura village here.