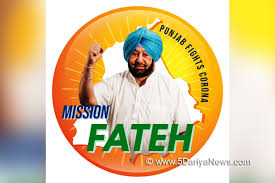 Jalandhar:  ‘Mission Fateh’ started by the Punjab government led by the Chief Minister Captain Amarinder Singh, the Punjab Building and Other Construction Workers Welfare Board has started the registration of the eligible beneficiaries at the ‘Sewa Kendras’ across the district.

Divulging the details, the Assistant Labour Commissioner Jalandhar Harjit Singh said that all the labourers including mason, daily wagers, Plumbers, Carpenters, Painter, Electrician, workers at brick kiln, steel fixers, welders and others could get themselves registered under the scheme at the nearby Sewa Kendras by paying a fee of Rs 25. He said that this registration would enable them to take the benefit of the various welfare schemes initiated by the board and the state government. Harjit Singh said that the processing fee at Sewa Kendras was merely Rs 10 whereas the worker would have to submit a monthly contribution of Rs 10. The Assistant Labour Commissioner further said that the construction workers after registration could get facilities like ex-gratia, Ayushman Bharat Sarbat Sehat Beema Yojna, a scholarship scheme for students, a scheme for the marriage of daughters and others. He said that during the Curfew the board has transferred benefits worth Rs 7 crore to the beneficiaries. Harjit Singh said that during the months of March and April Rs 6000 was transferred into the account of every beneficiary in two instalments adding that more and more workers should take benefit of these schemes.

It may be recalled that taking the state’s battle against COVID to the grassroots, Punjab Chief Minister Captain Amarinder Singh had on Monday launched a month-long drive, as part of `Mission Fateh’, to spread mass awareness about the pandemic. The campaign aims at broadening the ambit of Mission Fateh beyond the frontline workers by bringing the people of Punjab into its fold to make the fight against COVID a battle of the people, by the people and for the people.