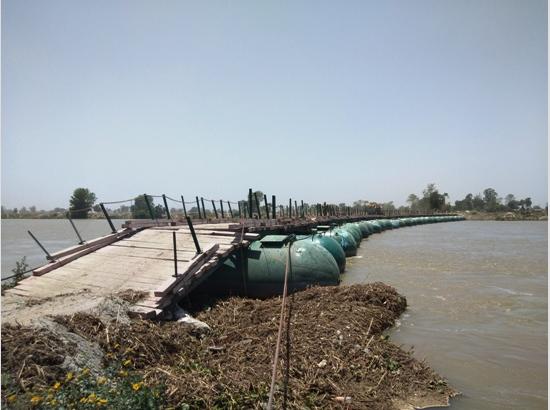 Ferozepur, June 11, 2019:  The release of water from Hussainiwala Head Works to Pakistan has irritated the farmers of the area but the same isactually to avoid the flood-like situation of 1988 on India side, ahead of monsoon season, said Rajiv Kumar Goyal, Executive Engineer, Canals. As per the information more than 10,000 cusecs water is being released into Pakistan from Hussainiwala, which the farmers term as total wastage of the natural resources, while the canals on the Indian side are dry.

However, the sources said, the capacity at Hussainiwala head works was about 4.5 lac cusecs but due to presence of hyacinth and encroachment at the some places along the Sutlej, the capacity has come down which has created a problem.

Rajiv Kumar Goyal informed that as per decision of the government, the water was released in the cotton belt by 21st May because of its early and in paddy area, the water has been released after proper cleaning of canals for use from June 13 – the date of sowing of paddy fixed by the government. The situation of release of water has arisen after a long gap as the storage capacity at the dam’s end are filled to the brim and the decision has been taken in the Technical Management Committee meeting of Bhakra Beas Management Board of three states – Punjab, Haryana and Himachal.

We are hopeful that farmers will not face any difficulty as there is sufficient water in the dams more than the level and canals have properly been cleaned, he said.   After 1988 floods, the decision has been taken to release the excess water in the Satluj which flows towards Pakistan to bring down the level in the dams. So far as canals dry is concerned, it is due to cleaning operation going on but it is matter is of coincidence, we have closed the canals while the water was being released.

It’s a high-alert situation. We cannot take risk by releasing the water in the dry canals as it would be difficult to control the situation.  The water releasing is monitoring on day today basis so that there are no chances of flooding of the area, he added.

Babushahi.com team members visited the border villages of Gatti Matta, Rajewala, Gajni Wala, Chak and farmers of the area expressed resentment over releasing of water to Pakistan as they were not aware of the ground reality.

Farmers of the area – Mehal Singh, Lahwinder Singh, Baljider Singh and Teja Singh informed that the balloon bridge which connects the villages across the river along the Indo-Pak border is dismantled when there is no water in the river.  They feel lot of inconvenience for marketing of crop for transporting to the grain markets by making their own arrangements.

However, they demanded that the capsule bridge over the river should be replaced with a permanent bridge so that the farmers of the area may not feel any problem throughout the year. The capsule bridge too is not safe for use when there is heavy flow of water, said one of the farmer. Farmers were of the view; the power connection provision for pumping out the water from the river when released to Pakistan should be made by the electricity department.  Sources of Electricity Department informed that there is no such provision in the rules.