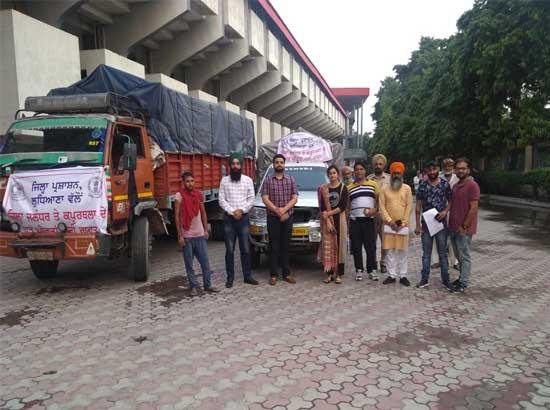 Ludhiana, August 25, 2019: District Administration Ludhiana today dispatched truck loaded with relief material to the most flood affected districts of Jalandhar and Kapurthala. The trucks were flagged off to the destinations by Dr. Poonam Preet kaur, Assistant Commissioner (Grievances) from Guru Nanak Dev Stadium.

It was disclosed by Mr. Pardeep Agrawal, Deputy Commissioner in a press release. He said that relief material which had been sent included Rice, Sugar, Black Chickpeas (Kale Cholle),Cattle Feed, Ghee, Pulses, Kale Mah, Potatoes, Onion, Peeli Daal, Kaali Daal etc. He said that for Jalandhar, relief material be handed over to SDM, Shahkot at Parkland Palace whereas for Kapurthala it will be handed over to SDM, Kapurthala at Grain Market, Sultanpur Lodhi.

The Deputy Commissioner said that anyone who want to contribute to the Chief Minister’s Relief Fund, he can directly credit the amount through RTGS/Cheque/Draft in the CM relief Fund having account number 001934001000589. This account is with Punjab State Cooperative Bank bearing IFSC code UIB0PSEB01. For further information one can contact help desk instituted at district administrative complex or he may contact Nodal Officer Ms. Poonam Preet kaur, Assistant Commissioner (Grievances) at 9646501343.