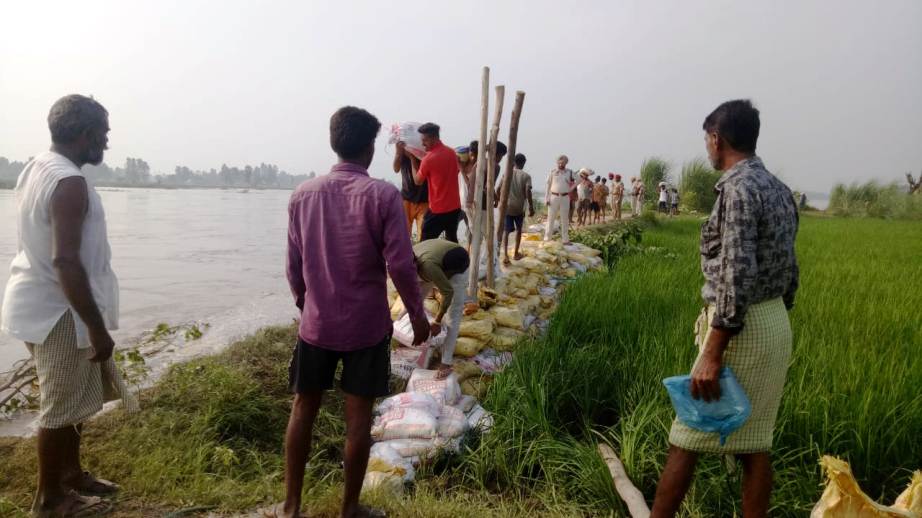 Damaged due to excess flow of water from Pakistan

Ferozepur, August 25, 2019: The rescue operation to repair the damaged embankment  due to excess release of  water from Pakistan in village Tendiwala near Indo- Pak border along the Sutlej River, is going on on war-footing with the help of civil, army, NDRF and civilians to plug the breach with filled sands.

Talking to media persons after taking stock of the repair work by Chander Gaind, Deputy Commissioner, Ferozepur said, the repair work is being supervised personally by me and a joint effort by civil, army and local people is being made to ensure to strengthen the bandh.

He said, all efforts will be made by the district administration to save the bandh and all concerned departments have been asked to coordinate with each other.

Tendiwala village is last border village from Indian side and the water released by Pakistan has affected this village.  First the Sutlej River water enters the Pakistan and when it comes back to the Indian side, the residue of Tanneries is added to it, said DC. However,  the embankment has been affected with the flow of water from PLakistan and as a precautionary measures, the Tendiwala and its surrounding villages have been announced to be evacuated, to meet any emergent situation besides deploying the Armt, NDF and Medical Teams of Health Deplartment.

He said, our first priority is to plug the embankment and sand filled bags in hundreds have been stacked and the work is still going on. 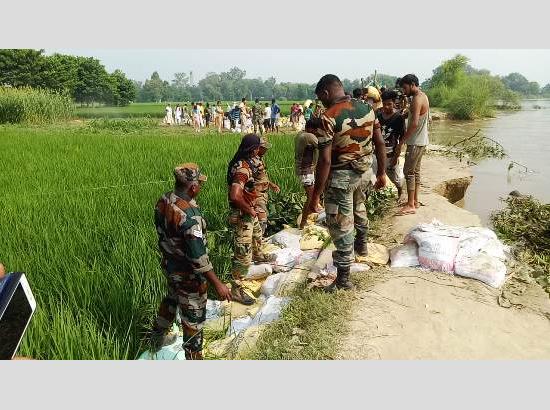 The entire operation is being supervised personally me and all the concerned officials related to flood affected have been directed to take seriously the completion task.

According to Deputy Commissioner Ferozepur, in 15 flood affected villages in Makhu and Hussaniwala area, nearly 500 persons had been evacuated to safer places and about 630 persons had been given necessary medical aid. In addition, nearly 950 food packets had been distributed to the people, and adequate arrangements has been made  for supply of feed and fodder to the livestock.

He also said, the  strengthening work at Village Tendiwala was going on in full swing and the Army was assisting in fixing the rift on the embankment and a close tab on the ongoing strengthening  of work at Tendiwala is being kept, to ensure its completion at the earliest.

DC said that the district administration is ready to combat any kind of situation with the deployment of rescue teams in the area and early evacuation of most sensitive villages however our primary focus is to strengthen the embankment to avert any sort of flood-like situation.