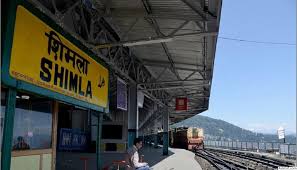 SHIMLA–Transport Minister Govind Singh Thakur here on Thursday presided over the review meeting of Railway Projects through video conferencing. While presiding over the meeting the Minister said that it was important to expand the railway from a strategic point of view in the state. He said that keeping national security in view international agency has conducted 22 surveys through satellite image system for strategically important 475 Km long Bhanupalli-Bilaspur-Manali-Leh railway line. As many as 30 railways have been proposed to be constructed on this world’s longest railway line. He said that a survey would also be conducted with the help of radar for this railway line.
He directed the officials to complete all other formalities including land acquisition for this railway line soon. Transport minister has directed the officials of railways and National Highway Authority of India to conduct a joint survey to prevent the incidents of falling of debris in the world heritage Kalka- Shimla railway line.
The minister said that all security arrangements such as parapets and boundary walls would be ensured to prevent such incidents. For the Una-Talwara railway line the formalities related to land acquisition and forest department should be completed soon, he added. He instructed the officials to repair of the old railway line, including the repair work, the process of cutting down dried trees should also be completed in a time-bound manner.
Chief General Manager, Ropeway and Rapid Transport System Development Corporation (RPDC) Ajay Sharma conducted the proceedings.
Principal Secretary Transport K.K. Pant, Concerned Deputy Commissioner and officials of Forest and National Highway Authority of India were present during the meeting.
By YS.Rana: