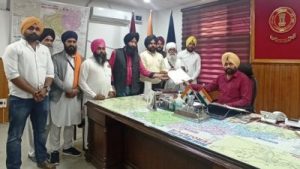 Ferozepur, February 26, 2020:  In a joint protest by Sikh outfits – Shaheed Udham Singh Youth Club Khai Pheme Ki,  International Panthak Dal and Alliance of Sikh Organization – today hold a protest outside the DC office by holding the placards and later submitted a memorandum to the Deputy Commissioner, Ferozepur demanding action against DGP Dinkar Gupta for his remarks at Panchkula, which have hurt the sentiments of Sikh community all over the world.

Meanwhile, coming to the rescue of DGP over the security concerns expressed by him regarding Kartarpur corridor, CM Capt Amarinder Singh has that DGP has apologized. Everybody makes mistakes. Even I make mistakes. We are human beings”.

The protesters demanded action under Section 295-A (Deliberate and malicious acts, intended to outrage religious feelings or any class by insulting its religion or religious beliefs…) for his dangerously communal outbursts against the Sikhs and Kartarpur Sahib.

They said, all political parties have termed the remarks as anti-Sikh  and there seems to be a big conspiracy behind it.

On this occasion, Advocate Manjinder Singh Bhullar, Baba Satnam Singh Walia, Mora Singh Anjan, Bhai Lakhwinder Singh and others, the anti-Sikhs remarks by DGP has exposed his intentions.  They said, after long strenuous efforts, the Kartarpur Corridor has been opened and remarks by DGP is an insult to the teachings of Guru Nanak Dev.

Adding they said, some time back, Secretary United Nations has paid obeisance at Kartarpur Sahib and appreciated the efforts by Sikh community and gestures shown by the Pakistan government which is not being digested by anti-Sikh elements.

They demanded from the Punjab government to immediately transfer him besides taking legal action.

Telephone Conversation between PM and Sultan of Oman