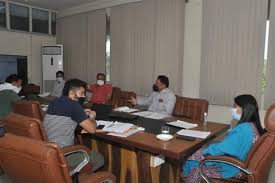 Jalandhar, May 27, 2020:   To give impetus to the overall development of the city, Smart City Chief Executive Officer (CEO) Dr Shena Aggarwal on Wednesday reviewed the progress of development works executed under Smart City Project.

Presiding over a meeting in the office, Dr Shena Aggarwal directed the officials to leave no stone unturned to make the Smart City Project a reality soon in Jalandhar and said the people have a lot of expectations from the project.

She discussed the position of other developmental works including installation of rain harvesting projects at 50 government buildings, using treated water for irrigation from STP Basti Peer Daad and solar panel projects, beautification of various chowks and others.

The Smart City CEO also said major push needed to be given to these projects for ensuring the holistic development of the city on modern lines.

She said that the state government led by Chief Minister Captain Amarinder Singh was committed giving a fillip to the projects under the Smart City Scheme.

On the occasion, SDO Soil Conservation  Lupinder Kumar and others were present.