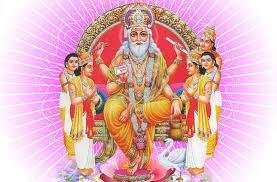 Ludhiana, November 6 ( By SK.Vyas ) :On the occasion of the birth anniversary of Baba Vishwakarma Ji, the Punjab government would be organising a state-level function at Ludhiana on November 8, 2018. Food, Civil Supplies and Consumer Affairs Minister Punjab Mr Bharat Bhushan Ashu would be the chief guest on the occasion, while Member of Parliament Mr Ravneet Singh Bittu would be the guest of honour.

While providing further information, Deputy Commissioner Mr Pardeep Kumar Agrawal stated that the Punjab government would be celebrating Vishwakarma Day as a state-level function in the city this year as well. He said that this function would be organised at the Vishwakarma Bhawan in Miller Ganj area of the city (near Vishwakarma Chowk), old GT Road, here. He said that the function would continue the entire day and the chief guest and other dignitaries would be attending at 10:30 am. The Deputy Commissioner appealed to the city residents to attend this function in large numbers.