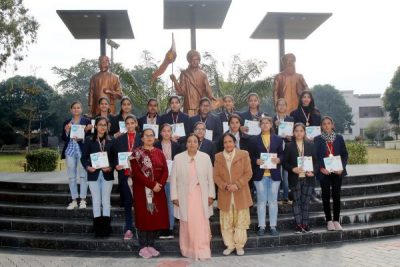 Jalandhar, January 23, 2020: The students of HMV Collegiate Sr. Sec. School participated in 10th IEO which was organized by Science Olympiad Foundation, New Delhi in collaboration with the British Council.

The Olympiad mainly focuses on the practical use of the English language and communication rather than rote learning and correct grammar.

Around 230 students participated in the first level examination. In this competition, Jaismeen Kaur of SSC-I (Arts) has been qualified and won a gold medal and she has qualified for the second level exam also, Srishti Garg won silver and Riya Sharma won the bronze medal. Banish, Vishavdeep Kaur of SSC-I (Comm) have won gold and silver medals respectively.

Principal Dr.(Mrs.) Ajay Sareen congratulated the students for their achievement. She also encouraged the winners to work with commitment.

School coordinator Meenakshi Sayal also gave best wishes to students and motivated students to endeavor for a better and deeper understanding of language to participate in such competitions for their mental growth and international exposure.

The exam was conducted by Ms. Jaspreet Kaur and Ms. Veena Arora from the English department.