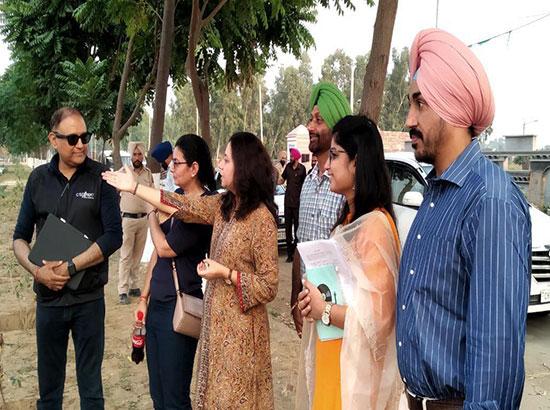 No stone to be left unturned in ensuring memorable celebrations in connection with 550th Prakash Purb: Anindita Mitra

Sultanpur Lodhi,  October 15, 2019 – “The Punjab Government would leave no stone unturned to turn the 550th Prakash Purb celebrations of Sahib Sri Guru Nanak Dev Ji, into memorable ones and as part of this, preparations on gigantic scale are being carried out at the places connected with Guru Sahib.”

This was reiterated here today by the Director, Information and Public Relations Department, Punjab, Mrs. Anindita Mitra while carrying out the minute review of the preparation for
digital museum and light and Sound  show at Sultanpur Lodhi besides taking stock of the arrangments to facilitate the mediapersons during the 550th Prakash Purb celebrations scheduled from November 1 to 12.

Divulging more, the Director said that the Punjab Government would organize series of functions at Sultanpur Lodhi,  where mediapersons from across the nation would visit. In order to ensure their hassle-free stay, the Punjab Government would set up a high tech media centre besides providing accommodation to them at a tented city erected near the main pandal where all facilities to them would be provided.

Throwing light on the digital museum and light and sound shows , the Director  said that as per the schedule approved by the Punjab Government, the digital museum would be open from November 1st to 3rd from 7AM to 5.30 PM. The use of ultra modern techniques is sure to turn the experience of the ‘Nanak Naam Leva Sangat’ visiting the museum, into a visual delight.

The Director exhorted the people to wholeheartedly participate in these events.