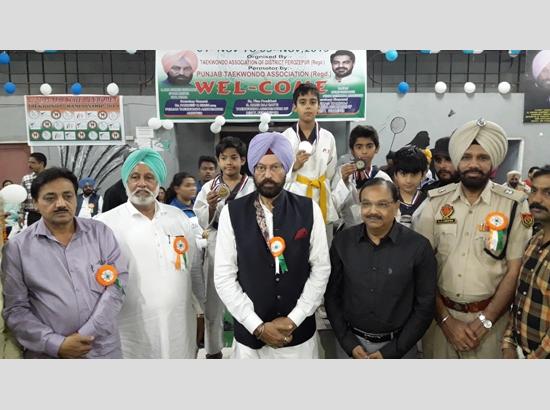 Ferozepur, 4 November4,2019 :Taekwondo is an excellent art of self-defense. Learning this not only enhances self-confidence but also creates a sense of strong self-defense. So the girls must learn this art. These views were expressed by Sports Minister Rana Gurmeet Singh Sodhi while addressing the players at the closing ceremony of Punjab State Taekwondo Championship at Shaheed Bhagat Singh Stadium. He called upon all the parents to bring their children to the game of Taekwondo.

While awarding the winning players in the program, the Sports Minister said that it is necessary that all the players land in the field with sports spirit. He said that sports should be an important part of our life because the person who comes to the playground never goes to drugs throughout his life.

Sports Minister Rana Gurmeet Singh Sodhi called upon the parents to engage their children in sports at an early age so that they can stay away from the evils like drugs when grown up. He said that if he had not been a sportsperson, he would not have been a politician as well, and he made the parents aware of reaching career heights through sports.

The overall trophy was bagged by Ferozepur in the Punjab State Taekwondo Championship. These matches were conducted in four categories – Sub Junior, Junior, Cadet and Senior. All the competitions were conducted separately in female and male categories. The team from Ferozepur district got the first prize followed by Ludhiana in second place and Jalandhar in third position. Teams from 19 districts participated in this match. Sports Minister congratulated all the players for their excellent performance and called upon them to practice with the same hard work and dedication in the future also.

On this occasion, Deputy Commissioner Chander Gaind thanked Anumit Singh Sodhi, head of the Punjab Taekwondo Association for organizing such a big sports event and said that he kept organizing such events in Ferozepur for the encouragement of children.