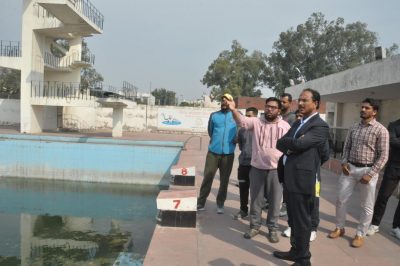 Jalandhar, February 20, 2020:  The Deputy Commissioner Jalandhar Varinder Kumar Sharma today said that in consonance with the commitment of the state government all-out efforts would be made for restoring the pristine glory of Sports College in the city.

The Deputy Commissioner who inspected their sports college today said that all-out efforts would be made to ensure that state of the art sports infrastructure was provided to the budding players. He said that this would enable the players to excel in sporting events at the national and international arena. Mr. Sharma said that no stone would be left unturned for ensuring that players do not face any sort of problem due to inadequate or out of date infrastructure.

The Deputy Commissioner inspected the Swimming pool, Gymnastic and Boxing hall, athletics track, hostel and others to have an on-ground view about the situation in the Sports College. He bemoaned that this institute was established to produce word class players from the region but with the passage of time it has lost its sheen. Sharma said that the need of the hour was to develop this college on ultra-modern lines to provide state of the art facilities to the young players.

The Deputy Commissioner said that he would flag up the issues with the state government and thrust would be laid on the complete overhaul of this apex sports institute.
He said that the sole motive was to develop this college as a nursery from where world-class players could be produced in the coming times. Sharma said that this would help in channelizing the unbounded energy of youth in a positive direction besides grooming them for major sporting events to bring laurels for the country and the state.