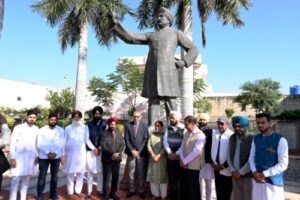 Lala Lajpat Rai, popularly known as Punjab Kesari, was born on January 28, 1865, at Dhudike. Chiefly remembered as a leader in the Independence movement, he sustained serious injuries in the lathi-charge by the police when leading a non-violent protest against the Simon Commission and died after less than three weeks of the incident on November 17, 1928.