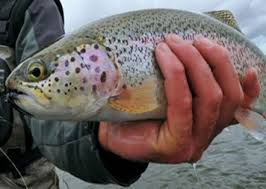 CHANDIGARH—One may call it a failure of the state administration or the department that this time Kullu’s trout fish could not make its entry in the menu of President Donald Trump during his visit to India.

People of India may be jubilant over the visit of Donald Trump, President of America but one important thing is missing from his menu. Trump has missed the taste of Kullu’s trout fish prepared in ice-cold water in Patlu Kahul of district Mandi in Himachal Pradesh. This time Trout has not sent from Kullu during the two-day visit of US President Donalk Trump to India.

Prior to this a number of dignitaries have been part of their menu. Trout were sent exclusively also for US President Barak Obama from  here during his visit to India. As per official information, the trout prepared and breed in the trout farm of Patlu Kahul was made specially served. Security personnel of USA and Indian arrived to the place in a special plane to take Barak Obama to trout to have a taste of it.

In the year 2019, the flash flood in the Beas River had devastated the trout fish farm of Patlukahul.  The farm is being rebuilt.There remained nothing of the trout farm in the flood. It is also revealed that some fish and eggs hatched in the farm were also washed away.  In 1989 the Indo-Norwegian Trout Fish Farm was set up at Patlu Kahul near Manali. Due to its taste and medicinal properties trout fish started making inroads from Hollywood to Bollywood.  Former prime minister Atal Bihari Vajpayee was also fond of trout fish.

Trout fish was also in great demand during Common Wealth Games held in New Delhi. The demand of trout fish, a delicacy from the Himachal, has suddenly surged in five-star hotels in the national capital. The demand of trout fish has increased many folds as compared to normal season, mainly due to increased demand from CWG organisers and hoteliers in Delhi, a spokesman of the state fishery department said.

Reared in ice cold waters in snow-fed rivers, trout fish is produced in Kullu, Shimla, Mandi and Chamba districts and the annual production was around 30 tonnes, which included 15 trout species and exotic Brown and Rainbow are found in Himachal Pradesh.

Pabbar river in Rohru and Baspa in Sangla valley and Uhl in Mandi is famous for trout fish farming which attract a large number of anglers. The department is also making efforts to popularise the angling of the golden Maher in the Pong Dam reservoir in Kangra valley.

CM directs to ensure smooth supply of pesticides to farmers

Emergency Operations Centers set up at state and district levels in Himachal.