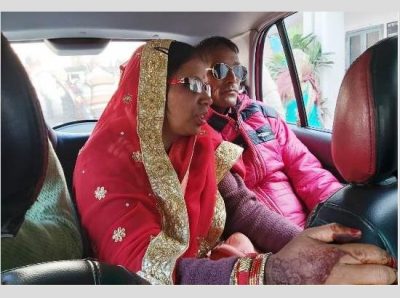 Ferozepur, January 27, 2020: Visually-impaired couple tied the knot in the Court at Assam but hosted a party at Home for the Blind, Ferozepur from where he passed out his Plus Two and got the government job.

It was pleasurable moments when the visually-impaired couple dressed up in bright colors were made to feel by explaining them about their dresses, making feeling a reality. Chander Gaind, Deputy Commissioner, Ferozepur could not join the party by the newly wedded visually-impaired couple, because of his preoccupation with Republic Day celebrations but sent his best wishes to the couple.

The visually-impaired couple – Vijay Tiwari and Jiya – got married first in court and then with family rituals at Durga Mandi in Assam, on Republic Day on Monday arranged a party at Home for the Blind where he stayed and studied for 24 years, which was attended by visually-impaired guests, family and management members. The court marriage was registered on 21.1.2020 at Assam.

Vijay Tiwari is Plus Two joined the government job in the PWD Canal department and his wife is graduate with a diploma in computer from Assam. Vijay Tiwari is only visually-impaired and youngest among two brothers and two sisters and all are married now.

Harish Monga attended the party on behalf of the Red Cross Society, Senior Citizen Forum and Press Club Ferozepur who helped financially the couple to arrange the household items. Anil Gupta, General Secretary, Progressive Federation for the Blinds and his team members helped in making all arrangements for the wedding and party.

Apart from family and management members of Home for the Blind, visually-impaired guests were also invited with who Vijay Tiwari has spent a long time during his schooling.

Speaking to this correspondent, the visually-impaired couple thanked the Deputy Commissioner for sending them best wishes, Red Cross, S p Khera, Senior Citizen Forum and Parminder Singh Thind, President,  Press Club, Ferozepur for financial help.  My special thanks for fulfilling my desire to drop me at my residence in the government allotted house in a car, said Tiwari.

Astrology is a connecting chord among our past, present and future : Saurish
Science City organize all brand open Do show
Comment