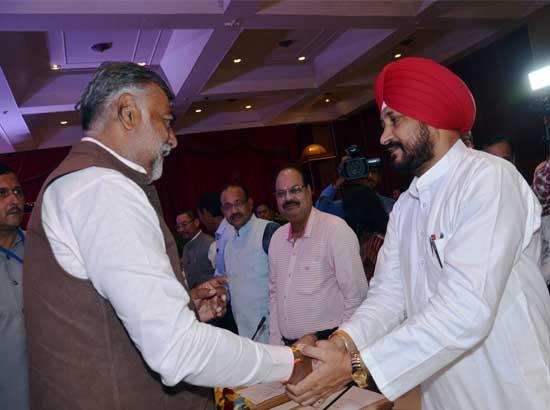 Also demands immediate release of Rs. 2145 by the Union Government for Sultanpur Lodhi & other development works

Chandigarh, August 21, 2019: The Punjab Government is going to celebrate the 550th Parkash Purb of Sri Guru Nanak Dev Ji on a grand scale with full religious fervour. The celebrations would see ‘Nanak Naam Leva Sangat’ from all corners of the globe. The Punjab Government solicits wholehearted cooperation from the Union Government with regard to these celebrations. The Tourism and Cultural Affairs Minister, Punjab, Mr. Charanjit Singh Channi emphatically took up this issue with the Union Tourism Minister Mr. Prahlad Patel during an informal meeting with the latter in New Delhi today. Mr. Channi also demanded that the Union Government must immediately release Rs. 100 crore for the celebrations.

In the aftermath of the meeting, Mr. Channi further said that he has also appealed to the Union Minister to immediately release Rs. 2145 crore (As per a proposal sent by the Punjab Government) for the scared city Sultanpur Lodhi and other development projects. Mr. Channi also took up the issue of expediting the release of Central Assistance under the Swadesh Darshan scheme.

Detailing more, Mr. Channi said that the meeting also saw various other issues such as Facilitating National and International tourists with web application and twitter based one stop service providing center by the Union Government, Initiating a mechanism for grievances redressal, Directions in the States and the UTs for Bed and Breakfast/Home Stay, Swadesh Darshan, and PRASAD scheme besides encouraging tourism through Social Media, being taken up.