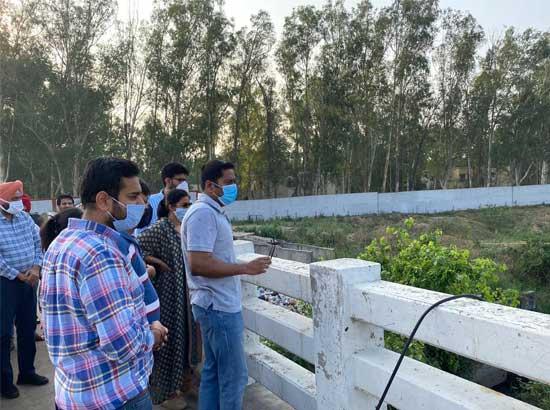 S. A. S. Nagar, June 24, 2020: The Deputy Commissioner Girish Dayalan along with the other officers of the District Administration and drainage department visited flood-prone areas at Bhankharpur, Tiwana, Jharmari and Nagla near Handesra on river Taangri and inspected the vulnerable spots.
On the occasion, the DC gave instructions to the drainage department officials to initiate timely action for cleaning the Sukhna choe at Zirakpur with special emphasis on cleaning booti, weed, jaala, sarkanda and other  wild growth to save nearby agricultural lands and abadis from water overflow in case of a heavy downpour. He also directed the placing of studs and construction of abutments for the strengthening of Tiwana Bundh. It was observed that people of nearby areas had encroached upon the Jharmari drain area, so immediate demarcation and re-excavation of the Jharmari drain through MGNREGA were ordered.
In order to stop the flow of water into village Nagla during the monsoon season, the Deputy Commissioner ordered the construction of the relief cut/inlets by laying of pipes in the bundh so as to ensure that the excess water flows back into Taangri river. He ordered similar inlets/relief cuts to be constructed at Rampur Kalan to check the Ghaggar water from overflowing into the village. Apart from this, he also directed strict vigil to be kept at vulnerable points.
The site inspection revealed that the construction of the Omax complex in Jharmari caused the stagnation of water. He ordered a show-cause notice be issued to the Omax Company so as sort out the problem of laying of adequate pipes. He also instructed the drainage department and EOs of Municipal Councils to identify the commercial complexes and colonies whose construction causes an obstruction into the flow of the rainwater.