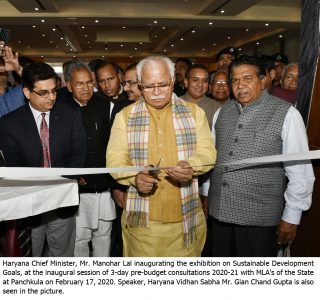 Chandigarh February 18: Haryana Chief Minister,  Manohar Lal said that anniversaries of great personalities should be commemorated through organizing different programmes in educational and other institutions based on their life and teachings so as to instil a sense of working spirit among the people.  This way, we could give them tribute in a real manner, he added.

He  was speaking at a programme organized to commemorate the 197th Jayanti of Swami Dayanand Saraswati ji on the second day of 3-day Pre-Budget Consultations 2020-21 with MLAs at Panchkula near here today. Speaker, Haryana Vidhan Sabha Mr Gian Chand Gupta, Ministers and MLAs were also present on this occasion.

The Chief Minister said that Swami Dayanand Saraswati was a multifaceted personality and had taken various new initiatives in the field of religion, education, spirituality and women empowerment. He said that Swami Dayanand Ji had played a vital role in the freedom struggle of the country. Various other great personalities like Netaji Subhash Chandra Bose and Veer Savarkar had also acknowledged his contribution in awakening the flame of freedom among the people in their speeches on different occasions, he added. 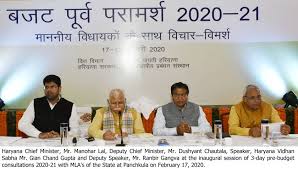 He said that great personalities hold a special significance in our society and their Jayantis are commemorated from time to time so that the young generation could take inspiration from their life. In the same series, the State Government too has also organized state-level functions to mark the anniversaries of great personalities in a befitting manner. Prominent among these are Guru Ravidas Jayanti, Maharishi Valmiki Jayanti, Kabir Jayanti, the birth anniversary of Shri Guru Nanak Dev ji and Prakash Utsav of Shri Guru Gobind Singh Ji.

The Chief Minister made an appeal to different communities to commemorate anniversaries of great personalities by organizing functions based on their life and teachings.

In his welcome address, Principal Secretary to Chief Minister and Additional Chief Secretary Information, Public Relations and Languages Department Mr. Rajesh Khullar thanked the Chief Minister for his decision to commence the proceedings of the second day of Pre-Budget Consultation Meeting 2020-21 with MLAs by remembering the high values and teachings of Swami Dayanand Saraswati Ji. He said that Swami ji played a vital role in giving a new direction to the country both politically and socially.

Mr. Khullar while referring to the Pre-Budget Consultation Meeting, said that it is a happy coincidence that on the 197th Jayanti of Swami Dayanand Saraswati ji, this meeting is being organized with the MLAs before finalizing the budget of the State. Probably it is the first such initiative ever in the democratic system of the country, he added.

Earlier, speaking on this occasion, Acharya Jaiveer Vaidic said that Swami Dayanand Saraswati Ji was the guiding force for the freedom fighters during the revolt of 1857. He said that Swami ji had always propagated for humanity, Vedas and mutual harmony. As a result of the work done by him for the uplift of women in the society, today the women are working shoulder to shoulder with men.