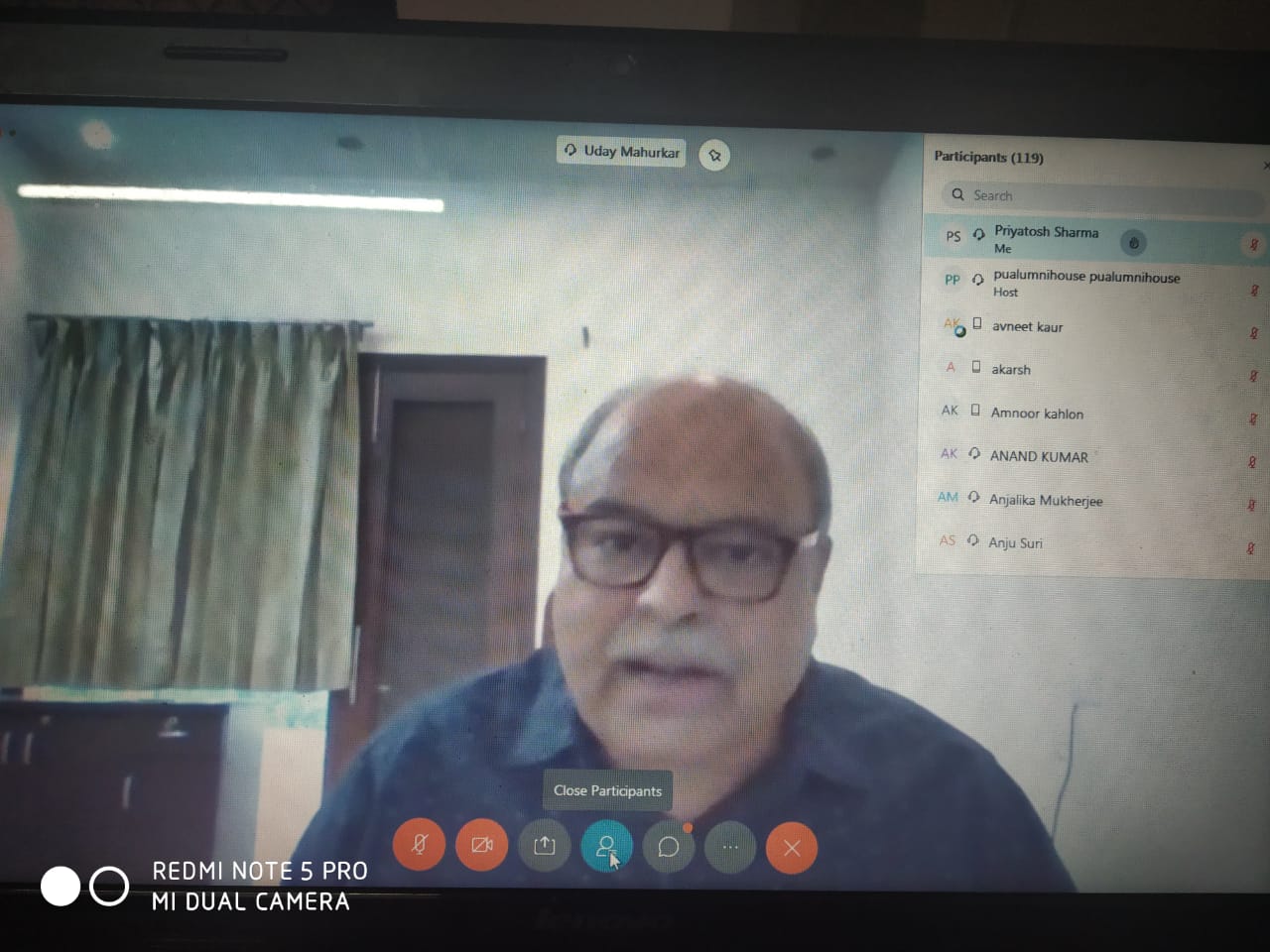 Mahurkar, the distinguished speaker delivered his lecture on, “Chattrapati Shivaji: A New Discovery” in an analytical and thought-provoking manner. His candid, comprehensive and critical presentation was indeed spell-binding. Professor Anju Suri, Chairperson, Department of History was the Director of the Webinar, Professor Deepti Gupta, Dean Alumni Relations and Chairperson, Department of English was the Convener and Dr. Priyatosh Sharma, Associate Professor, Department of History was the Co-Convener of the Webinar.

The Vice-Chancellor, Prof Raj Kumar applauded the joint effort of the Department of History and PUAA for organizing the Web Lecture on an endearing historical personality of Shivaji. In his inaugural remarks, he said that great deeds make great personalities like Shivaji. Chattrapati Shivaji’s life and achievements impart inspiration to one and all. His leadership role, his organizational skills, his courageous military exploits earned him the reputation of a great ruler and won him glory. The spirit of nationalism may be imbibed from the heroic deeds of Chattrapati Shivaji. The present generation must preserve the memories of the great leader in Shivaji and pay tribute to his daring acts in fighting back Mughal tyranny. Professor Raj Kumar expressed his concern that the role of Shivaji must be discussed at length in the scholarly works to form a fair estimate of his life and personality.

Dr. Anju Suri, Professor and Chairperson of the Department of History introduced Chattrapati Shivaji as a powerful ruler known for his chivalry, courage and heroism. He set out for military campaigns with a strong conviction and determination to win and he tasted victory after victory to establish himself as a strong ruler. He possessed a rare combination of intellect and diplomacy. His role as a great organizer and a strategist cannot be underestimated.

The distinguished speaker,  Uday Mahurkar in his insightful and intellectual lecture addressed Shivaji as an Emperor instead of Chattrapati. He assessed the role of Shivaji on the basis of four determinants, which are generally required by a person, for being the most powerful Emperor and Shivaji qualifies all of them successfully. Shivaji expanded his empire by way of his conquering abilities to the length of 1600 km from Poona to the land beyond Chennai. His strategic skills and command of his army instilled such enthusiasm among his soldiers that they continued with the legacy of successive victories during the lifetime of Shivaji and even after his death. Within forty years since his demise, the Marathas reached Delhi and became a dominating force. Shivaji’s combating skills speak of his powerful personality. He strongly believed that the attack is the best form of defense. He was a diplomat par excellence and knew to play his cards well. He handled his Mughal enemies including Aurangzeb with diplomatic maneuvers and often made a truce with them to break them soon after. Shivaji has always remained fearless before Aurangzeb whereas the latter was afraid of his strategic skills and intellectual abilities. Despite all resources and authority at his disposal, Aurangzeb was belittled by Shivaji in combat pitted against him and this fact has been indicated by Aurangzeb in his will too. The historical records have praised Shivaji and addressed him as ‘the greatest constructive genius’. His warfare achievements are as much appreciated as his welfare achievements. Shivaji took up several measures for the welfare of his subjects including the issue of seed loans by the State to the farmers. As far as his social reforms are concerned, Shivaji allowed those who had defected Hinduism to embrace Islam to come back to Hinduism. Secondly, he taught each class to fight. Dalit Regiment of Maharashtra could be organized because of this initiative of Shivaji. Shivaji should find more space in history books and should be given higher status as an Emperor.

The highly informative and incisive lecture was followed by the Question-Answer Session conducted by Dr. Priyatosh Sharma of the Department of History. The lecture was joined by experts from academics, scientists, researchers, students and faculty members from various diverse Departments and Universities across India. The lecture ended with the formal vote of thanks delivered by Dr. Vinay Kumar, Secretary, Faculty of Arts, Panjab University, Chandigarh.