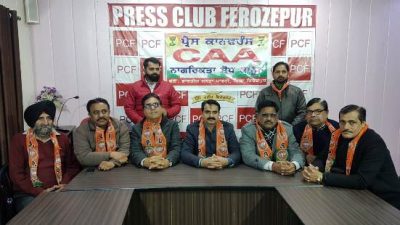 President, Davinder Bajaj along with senior leaders submitted a memorandum to the Deputy Commissioner in the name of Governor Punjab demanding apology from Capt Amarinder Singh, Chief Minister Punjab for giving a statement for non-implementation of Citizenship Act (Amendment) – CAA – in the Punjab state when he has taken the oath of CM to protect the integrity of the Constitution of Indian.

Earlier holding a press conference at the Press Club, Ferozepur, Davinder Bajaj, BJP District President said, the CAA has been implemented after the approval of the Parliament and stamp of the President of India.

Further said, in case the CAA is not implemented in Punjab, the BJP will hold a massive protest in the state, as per the strategy planned by the BJP Chief.

Bajaj said, after the partition in 1947, the CAA allows people from Bangladesh, Pakistan and Afghanistan to seek Indian citizenship. The Hindu and Sikh refugees from Pakistan, Afghanistan and Bangladesh, have to live a very uncomfortable life and forgetting various government benefits including jobs. The BJP has taken the initiative to make their lives easy by providing them citizenship but the Congress government led by Capt in Punjab is opposing for implementation of CAA.

DP Chandan, former Planning Board Chairman said, the introduction of CAA was necessary to rehabilitate such persons who have not yet been any identity despite living in India for long. The Act is not to oust any community rater to rejuvenate them.   He said Congress party was afraid of losing their vote bank and did not have the courage to grant legitimacy to these refugees and they are misrepresenting the CAA while Modi is in favour of the uplifting of these people of minority communities who were mistreated in their countries.

To a question that BJP run States are itself not ready to honour CAA, Ashwani Grover, President, Municipal Council said, No doubt there is a problem in some States but the same will be sorted out shortly by clearing the motive behind the move.