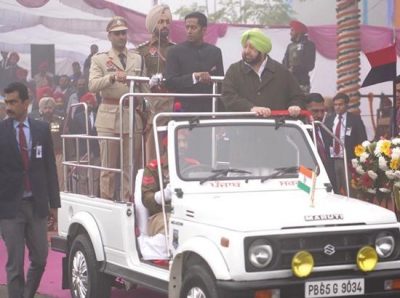 Mohali (SAS Nagar), January 26, 2019: Asserting that the secular foundations of India’s Constitution would continue to stand firm, with the blessings of the Akal Purukh, for all time to come, Punjab Chief Minister Captain Amarinder Singh on Sunday vowed to protect one and all, irrespective of caste, creed or religion.

The Chief Minister declared that the nation’s unity was inviolable, notwithstanding the discordant voices being raised in the current scenario. Pointing out that the resolution passed by the Punjab Assembly (on CAA) was there for all to see, the Chief Minister made it clear that the state would not allow the country’s secular fabric to be destroyed at any cost. Greeting the people of Punjab on the 71st Republic Day, the Chief Minister said “secularism was the message of our Guru, whose philosophy of ‘Na koyi Hindu, Na koyi Musalaman, Sab Rab ke bande’ is imbued in our consciousness.”

On the occasion, Captain Amarinder unfurled the tricolor, and also took the salute at a colourful parade, followed by a cultural extravaganza by school children. For the first time this year, the Republic Day celebration in the state witnessed an inspiring display by the Special Operations Group (SOG), constituted by the Chief Minister as an elite, specially trained force to combat terrorism, infiltration, hijacking and other threats. At the same time, his government would continue to work dedicatedly for the progress of Punjab, which had attracted unprecedented investment over the last two plus years, said the Chief Minister, pointing to the Rs. 57,735 Crore investment secured on the ground.

He said the efforts to bring in industry would continue, in order to tackle unemployment, which he termed as the biggest challenge faced by the state. Under the `Ghar Ghar Rozgar te Karobaar Scheme’, 11 lakh jobs had been given to unemployed youth in the state by his government, he said, adding that these efforts would be further strengthened in the coming months.

Emphasising the need for quality and more relevant education Captain Amarinder announced that 19 new IITs would be established in the state, along with new medical colleges in Mohali, Kapurthala and Hoshiarpur. “Farmers have earned Rs. 44,000 crore more in the last six seasons of our Government as compared to the corresponding period of the previous government, as a result of steps to ensure smooth procurement, check on exploitation of farmers and streamlining of transport and labour operations,” he said.

Underlining the importance of environmental protection in the face of the global warming, which was adversely impacting weather patterns, Captain Amarinder disclosed that so far, 76 lakh saplings had been planted across all villages and towns in the state. He appealed to every citizen to contribute to the care of these saplings.

Sarbat Sehat Bima Yojana, covering 48 Lakh families (2.2 Crore persons), as against the 14 lakh families covered by the Government of India under scheme. More than 1 Lakh persons have already availed free cashless treatment under the Yojana, he added. The new AIIMS at Bathinda had also become functional, he noted.

Terming the drug menace as an issue of grave concern, Captain Amarinder said his government remained committed to the total elimination of the problem. The STF set up to tackle the menace had shown excellent results, with as many as 34,373 cases registered so far under the NDPS Act and 42,571 persons having been arrested with recovery of 974 kg heroin. More than 1 lakh addicts are being treated at the 193 OOAT Centres established by the government.

The Chief Minister also expressed satisfaction at the fact that 10.7 lakh beneficiaries had so far been assisted under the Mahatma Gandhi Sarbat Vikas Yojna, which aims to ensure that the welfare schemes of the government reach the eligible beneficiaries. His government, going forward, would further strengthen Mission Tandarust Punjab, and would continue to strengthen its e-service network, which had recently received a major fillip with the launch of Mobile Application  – `m-Sewa’ – to provide Government services through smart phones, said the Chief Minister.

Disclosing that his government had earmarked Rs. 6200 Crore for Scheduled Caste Sub Plan this year, which was more than 35% of the Budget Estimates, Captain Amarinder reiterated his commitment to the welfare of the weaker sections of the society.

Expressing concern on the issue of safety of women, the Chief Minister said apart from the free Pick and Drop facility by the State Police, One Stop Sakhi Centres had been established in all Districts for the “protection of our daughters.”

On the critical issue of the depleting water table, the Chief Minister stressed upon the need to conserve water, whose level had come down to less than 13 MAF, as a result of 73% of it being used for irrigation purposes.  He hoped the Punjab Water Resources (Management & Regulation) Act would help address the problem in a big way. Additionally, his government had engaged the services of Mekerot, the National Water Company of Israel, for formulating a Water Conservation & Management Master Plan (WCMMP), he added.